Ms. Gokovi is the Founder & CEO at Hoinser Magazine. She is also the Global Goodwill Ambassador at the Canadian non-profit, FAAVM. She is also the Ambassador for Human Rights & Peace. Ms.  Denisa is Ambassador of Peace to Cad bridge Corporation, USA.   Ms. Gokovi is an honoured member of the “International Royal Academy” of the United Nations, also the Ambassador of Culture and Art for the “International World Peace Committee “. She is also the Ambassador for Arts and Humanities in the “Royal Society Group” and an Ambassador for “Global Union” .An accomplished musician and composer, Gokovi has studied piano since the age of six. She often performs live concerts and donates time performing for benefits supporting underprivileged communities and children. She also aids young artists in their professional development and training.  Ms.  Denisa was recently nominated in 2019 for the Global Humanitarian Award by the World Peace & Diplomacy Organization, Also She is award winner  “Creator of Greatness “ 2020 ,United Kingdom.  She has been appointed to her role as Chairperson & Speaker for Albania in the Women’s Economic Forum, India and also in the Global Ambassadors’ organization of Human Rights. Ms. Denisa is member  of the ECO LEAGUE Forums team & Cher Eco City – Singapore

Her perspective, imagined for the tangible reality in Albania, influenced various innovative spaces, such as the humanitarian model of youth tolerance and spirit, integrating their vision into a fair advantage over the right choices.  Ms.  Denise has been a member of several national and international associations, mainly to protect the rights of women and children.  Protecting a story requires not only facts, but emotional experiences that bring attention to the truth.  Ms.  Denise completed her music studies and focused on philosophy, while pursuing professional practice in various marketing areas.  She then alternated with her passions by collaborating with one of the oldest and most recognized associations in Albania, the Association „For the Benefit of Albanian Women” in which we work as a team for women’s rights, integrity and development potential.  & their economic.  In this association there is also a branch of music where  are trained in music education, non-pre-planned and abandoned children.  Her focus is on social awareness and the changes needed to improve the psychosocial and economic-social status of people. Her work is followed over the years, creating profiles and engagements with great human and social responsibility.  Her creative goal created collective awareness through various conferences that were organized several times, who she as invited in  several important world organizations , respected  her dimensional personality, as a strong voice representing Albania.  She also dedicates her time to different social level of people , she is very loving and dedicated to them. Ms.  Denise has been part of various national and international interviews, cited by TV, magazines and newspapers.  One of the most successful cases has been the NYC radio show „In the Hearts of People” which invited various personalities from the world of culture and humanity.  Also various magazines and blogs that have supported her global initiative by working independently and competitively in the international market.  The day-to-day activity of providing collective well-being, solutions and creative opportunities for young people is the model of teaching and professional orientation making the energy of our youth to create the complex knowledge system of high international qualifications.  This is one of the current goals that include Ms. Denise’s dedication and commitment.  Abilities  of the exploratory powers and training, education of our youth.   Denise has poured her potential into this new venture, where she has developed in recent years to represent the culture and model of national success in the international arena through the extraordinary talent that our young people receive.  Confidence and integrity is the desire and passion to promote internationally quality relationships, achievement style, reflection of success, specially selected programs as well as the highest ratings with valuable humanitarian objectives worldwide. Ms. Denise’s Conceptual campaign,  has been subject to various objectively acceptable price ratings by some important personalities, including the most affected areas of poverty mentioning countries such as Africa, India and a significant portion of Asia in social interaction and independent voices.  in global initiatives.  Its progress has been further highlighted in the style of psychoanalysis, summary and political codes in various business and technology enterprises.  All of these elements represent development and institutional change on theories and objectives important for establishing the ideas of diplomacy and the public sector. In this category of volunteering and principled dreams, it is worth emphasizing that Ms.  Denise comes from an unusual story of infiltration and torture that imposes corruption on the underdeveloped tasks of transition countries as they deviate for even greater interests in diplomatic structures, so Denise has decided to stimulate her work through creativity and balance.  to be a safe destination for the national history of her country as well as a qualified image in the essential functions of social change that precisely need promotional roles, targeting the major problems, claims and mental spaces of illegal exploitation,  based on immigration, violence, social and racial equality.  A large number of objectives that Ms.  Denise is totally involved in the main protagonism of global creativity.   Ms.  Denise has sought to document major changes as well as enable influential efforts in various sectors by organizing members of various boards of international organizations on fundraising objectives to open  children’s, women charity centre,  by proposing balancing agreements between countries that plan social education campaigns and improve the economic situation.  Mission of Ms.  Denise progresses in the long journey of very important relationships, that she  could through faith , to be  able and create radical changes in the activities that interpret the culture of different countries by promoting young people  through humanitarian objectives.  Success story is a tested experience of heroes, greatness of truth, individual ability and human attitude. In the near future, her activism will focus on the field of entertainment and humanism, focusing on the priority of simplicity and sacrifice as a human experience, with the courage and discipline  to embrace knowledge, political and religious consensus, and to fund programs combating the destruction of objectives by perfecting arguments for freedom of residence from the processing of falsehood to the necessary elite mediation on the competition of social levels that project the future and destiny of the people. The stated call for cultural innovation, structural leadership, sharp diplomacy and important human positioning are a clear identification of the values ​​that possess different perspectives on her individuality.

The struggle for survival is the key to the sacrifice of her promises, the kind of protagonism, the influence of thought that will follow in some international works, through the realization of her  philosophical books, the elaboration and collective interventions on intertwined institutional confidentiality and numerous engagements such as  leaders in spiritual science, human idealization, and global leadership. The magnificence of fate is the dazzling light of social imposition as an individual right where great changes can be made by certain personalities, and this image of human equality brings great global opportunities in the illuminate experiences of humans.  this intellectual and humane responsibility will accompany Ms Gokovi in ​​all her endeavours to make history by representing various countries of the world affected by war with important subjects of the most demanding diplomatic discussions in the international arena. Dreams are the existing power of self-confidence as an important element of hope and the human spirit in the various world disciplines. The historical and human power of leadership is the confidant of global justice, the energy and courage of Ms.  Denise will turn her story into a human work as the right of poor populations over a code of intelligence by self-reliance on the support and greatness of large, globally influential enterprises. Human inspiration is the key to the success of global history.

The text represents the point of view of the author 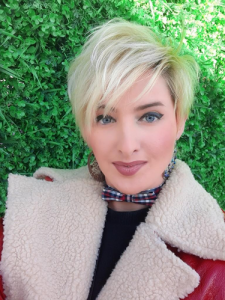 To achieve her vision, H.E Denisa Gokovi holds various roles which include:
• Global Goodwill Ambassador at the Canadian non-profit, FAAVM
• Ambassador for Human Rights and Peace for Cad bridge Corporation, USA
• Honoured member of the “International Royal Academy” of the UN
• Ambassador of Culture & Art for the International World Peace Committee
• Ambassador for Arts and Humanities in the “Royal Society Group
• Ambassador for African Child Projects
• Goodwill Ambassador to of the Noble World Records, India
• Dame Grand Officer of the Holy Order of Protection & Education for women children and families ( H.O.P.E)
• General Coordinator for “Wisdom International Festival”, Albania.
• National Brand Ambassador of International Non-Olympic University
• Adviser of INOU Peace – Mission
H.E Denisa Gokovi has also received various awards such as the Global Humanitarian Award by the World Peace & Diplomacy Organization in 2019. She has been appointed as Chairperson & Speaker for Albania in the Women's Economic Forum, India and also in the Global Ambassadors' Organization for Human Rights. She is member of the ECO LEAGUE Forums team & Cher Eco City - Singapore (2019-2021).
Based on her work and real-time achievements as a pianist, composer, model, writer, philosopher, and Global Goodwill Ambassador for Art, Culture, Peace and Human Rights; , it is evident that Her Excellence Denisa Gokovi has aligned herself to her greatness and created new paths. We at Greatness University consider it an honor to bestow upon her the prestigious World Greatness Award. As she has been a leading light that is shining brightly and attracting followers from various parts of the world, we recognize her as a Leading Light of Greatness.